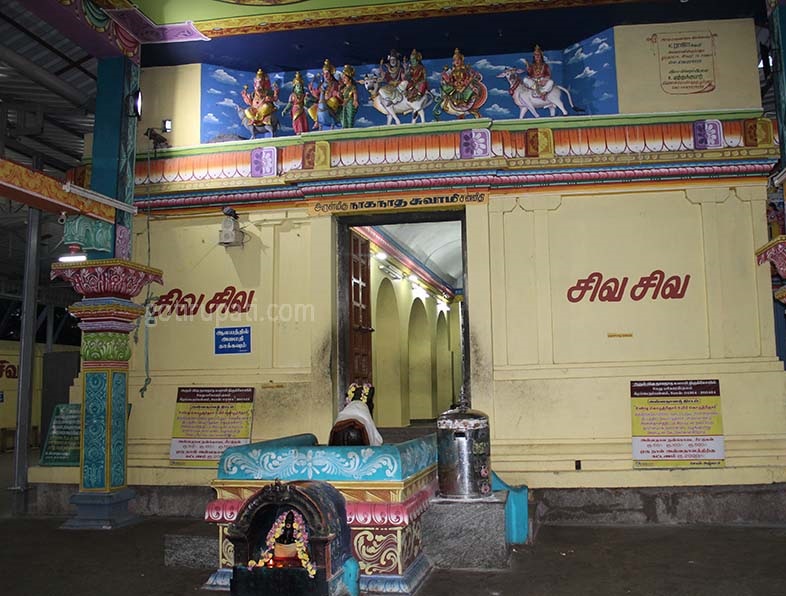 During the churning of the milk ocean, Vasuki the serpent used as the rope for the purpose got exhausted and split its venom.Devas ran to Lord Shiva for protection from the impact of the spreading poison.Lord swallowed the poison and protected the world.Vasuki felt that it had caused Lord Shiva to swallow its poison and performed penance seeking Lord’s pardon.Lord gave darshan to Vasuki and admired its sense of sacrifice.Vasuki begged Lord Shiva to stay in the place.Lord obliged Vasuki and stayed here named after the serpent-Naga – Naganathar. Keezhaperumpallam is one of the Navagraha Temple located in the Cauvery Delta region dedicated to Shri Kethu (South Lunar Planet). Both the Devas (Angels) and Asuras (Demons) wanted to get Amirtham (nectar) from the Parkadal (Milk Ocean). Lord Vishnu as in the shape of Mohini was distributing Amirtham to the Devas. At that time Swarvabanu took divine shape sitting between the Sun and Moon received the Amirtham and ate it. This was informed to Lord Vishnu by the Sun and Moon. Lord Vishnu was keeping a long spoon in his hand and he hit the Asuras head heavily. The Asuras head and the body were separated.The head part goes to Lord Kethu. The devotees may get certain defects caused by Kethu as Nagathosam, Kethu thosam Marriage thosam, children thosam, snake thosam, defects of the former birth are redressed when they pray here.He is a fearless planet doing all good for the devotees belonging to his Rasi. People pray to planet Kethu for excellence in education and family prosperity.Those facing some adverse aspects of this planet, pray first to Lord Naganatha and Kethu with red flowers, offering horsegram rice – Kollu sadham – as nivedhana and light seven deepas.Pujas are performed to planet Kethu at Rahukalas and Yemakanda Kala times. According to the story, when amirtham emerged after churning of the Paarkadal by the devas and the asuras, Lord Vishnu in the guise of Mohini was distributing the amirtham only to the devas. Realising this, Rahu (an asura) with the help of Sukrachariyar, took the form of a deva and consumed the nectar. Suryan and Chandran who noticed this, complained to Lord Narayana. In anger, Lord Narayana hit Rahu on the head with the spoon in his hand. The head was cut off and fell on the ground. But because he had consumed amirtham, his head and body continued to live. The body of the snake got attached to the head to become Ketu. 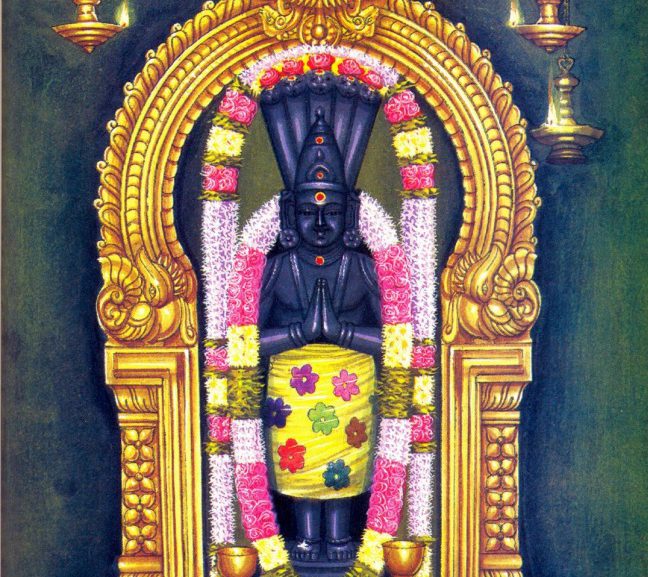 Ketu is generally referred to as a “shadow” planet. He is considered as Tail of the Demon Snake. It is believed to have a tremendous impact on human lives and also the whole creation. Astronomically, Rahu and Ketu denote the points of intersection of the paths of the Sun and the Moon as they move on the celestial sphere. Therefore, Rahu and Ketu are respectively called the north and the south lunar nodes. The fact that eclipses occurs when Sun and Moon are at one of these points gives rise to the story of the swallowing of the Sun and the Moon. Ketu represents karmic collections both good and bad, spirituality and supernatural influences. Ketu is associated with the Meena Avatar (Fish Incarnation) of Vishnu. Ketu signifies the spiritual process of the refinement of materialization to spirit and is considered both malefic and benefic, as it causes sorrow and loss, and yet at the same time turns the individual to God. In other words, it causes material loss in order to force a more spiritual outlook in the person. Ketu is a karaka or indicator of intelligence, wisdom, non-attachment, fantasy, penetrating insight, derangement, and psychic abilities. Ketu is believed to bring prosperity to the devotee’s family, removes the effects of snakebite and illness arising out of poisons. He grants good health, wealth and cattle to his devotees. Ketu is the lord of three nakshatras: Ashvini (Ashwini or Ashwathi), Magha (Maham) and Mula (Moola). The people who come under the influence of Ketu can achieve great heights, most of them spiritual. The Adi Devatha is Chitragupta and the Prathyathi Devata is Lord Brahma and his color is red and his vahana is the eagle. The grain associated with him is Horsegram. The flower is red lily and the fabric is multi colored cloth, gem is Cat’s eye. Offering is rice mixed with the powder of Horsegram. The significations of Ketu are salvation, sight, property, land, gold, vehicle, fame, wife, children, knowledge, business, happiness and unexpected gains. Ketu whose other names are Dhwaja and Sikhi acts like Mars. It generally reflects the traits of the sign it occupies provided it is not aspected by any other planet. If it is aspected or conjoined by any other planet it imbibes its qualities. Kethu is an Asura by birth, when he was young he was known as swarvabanu. His grandfather was kasibamunivar, his father was Vibarachithu and his mother was Simgigai. As his mother was Simgigai he was called as Simgikeyan.

The Naganathar are believed to be the transmitters of Universal, quintessential energy or power. The Naganathar are closely associated with the fixed stars in the Zodiac. Each Navagraha temples are located at different places in and around Kumbakonam sector. The Navagraha temples are considered to be the best destination to get rid of from the influence of planets. And most of these Navagraha temples are dedicated to Lord Shiva and Lord Shiva is worshipped as the main deity. The only Navagraha temple dedicated to one of the nine Grahas (celestial bodies) is Suryanar temple.During the churning of the milk ocean, Vasuki the serpent used as the rope for the purpose got exhausted and split its venom.Devas ran to Lord Shiva for protection from the impact of the spreading poison.Lord swallowed the poison and protected the world.Vasuki felt that it had caused Lord Shiva to swallow its poison and performed penance seeking Lord’s pardon.Lord gave darshan to Vasuki and admired its sense of sacrifice.Vasuki begged Lord Shiva to stay in the place.Lord obliged Vasuki and stayed here named after the serpent-Naga – Naganathar.